Sleeping On Your Back While Pregnant? (You Should Avoid It!)

Why sleeping on your back while pregnant is bad?

As soon as you are pregnant, you will get a lot of advice from family, friends, and even strangers.

You will undoubtedly read them yourself on all kinds of forums, blogs, and websites. We often hear them during office hours about the fear of sleeping on the back.

In this week’s blog, a start with more information about these fables! This time everything about the sleeping position, and why shouldn’t you sleep on your back while pregnant?

This is something that pregnant moms need to be aware of during their pregnancy. Let’s move on and understand the risk here 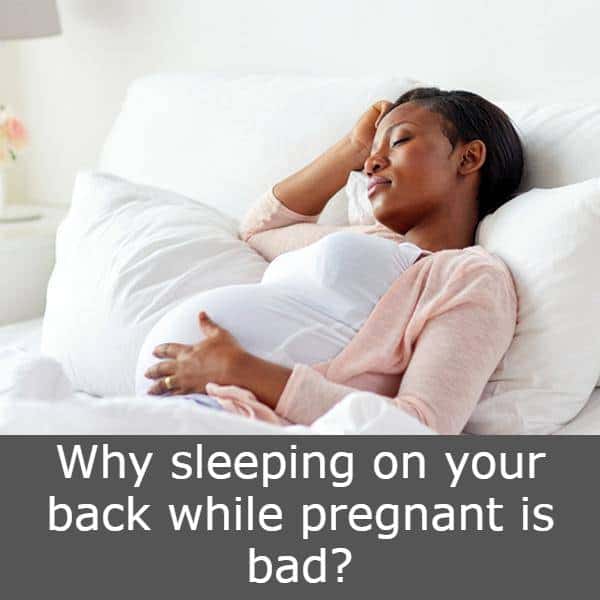 How Bad is it Sleeping On Your Back While Pregnant?

For example, you will no longer do belly sleep when your belly gets in the way. can you sleep propped up on your back while pregnant?

In the third trimester, your baby will gain a lot of weight. At 30 weeks of pregnancy, a child weighs an average of 1500 grams, at 40 weeks, that is 3500 grams! It is possible that when you lie on your back, the weight of your baby will clamp off your own lower hollow vein.

You can become equally dizzy or nauseous because there is temporarily less blood flow to your brain. We also call this the ‘vena cava syndrome.’ As soon as you don’t feel well, you will want to turn on your side, and the ‘problem’ is solved immediately! Before the baby is affected, you are already on your side, so it is also harmless.

Where does that fable come from that you should not lie on your back? During childbirth, children may ‘respond’ to contractions. They can be stressed by childbirth. This is heard or seen when the heart is listened to or when a CTG is made. It is known that children who are under stress benefit from more oxygen.

This already happens when the mom is not lying flat on her back. An angle of 30 degrees is enough to have the supply as optimal as possible. With side position, you achieve this same effect.

Especially at the end of pregnancy, the belly can get in the way. With extra pillows or, for example, the feeding pillow, you can give your stomach extra support. A cushion between the knees is very pleasant for the pelvis.

Dear mommies In Spe, so lie down as you want so you can sleep well. The baby really protests when you adopt a position that is not comfortable for him/her.

Will Sleeping on your back While Pregnant Cause Stillbirth?

A large vein, the vena cava, runs to the right of the uterus. Late in pregnancy, when a woman lies on her back or on her right side, an unusually heavyweight of the uterus can cause this vein to constrict, causing reduced blood flow to the fetus.

Researchers believe that decreased blood flow to the fetus, if sufficiently severe and prolonged, may result in fetal death.

What does this mean in practice?

Well, here is where it gets complicated. With four studies all showing the same thing, it seems likely that sleeping backward actually increases the likelihood of being late. But whether it significantly increases the possibility of stagnation being late is a more complicated question.

First, let’s recall that late miscarriage affects only three pregnancies out of 1,000. About one-third of these are caused by stillbirth birth defects, placental abdominis (rupture of the placenta away from the uterine wall), and infections. There is no connection to sleep behind these so stillbirths.

For the remainder, known as unexplained late delivery, the causes are incompletely understood but appear to be primarily related to a failed placenta. Back sleep can increase placental failure by further restricting the fetal already blood flow.

However, back sleeping is the most important risk factor associated with unexplained late delivery. Being obese, being over 40, and Smoking during pregnancy is far more important. The Centers for Disease Control estimates that in high-income countries, such as the US, about 8,000 deliveries occur each year due to being obese or overweight during pregnancy, women aged 35 and under have about 4,200 births each year, and Smoking contributes to pregnancy. About 2,800 Stillbirths every year.

About 45% of pregnancies ending in late delivery involve embryos with intrauterine growth restriction. There is also a risk of diabetes or high blood pressure disease. And African-American women are at greater risk than Asian and white women.

In short, the sleepiness of the back seems to contribute to a fraction of the whole tragedy, but thankfully it is a rare occurrence.

And here is no change in the writing of standard media about this research: regular nappiness also increases the risk of stillbirth, according to these studies. Nobody knows why. I still have a researcher in danger for clarification as well.

Oh, and so one has to get up to go to the bathroom once or less in the middle of the night. (Yes, you cannot consider not urinating multiple times per night as a win in your third trimester. There is no win with these figures.)

Luckily, has this research made you shop for a new pregnancy pillow, only to sleep on your left side, or call BS, as you reach for the second helping of Brie and a half glass of wine, there is a straightforward solution: if you sleep on your back, put a pillow under your right side.

Now it’s your turn. leave your answer in the comment box, what you are doing to choose to best pregnancy pillow for yourself? Your decision will help other pregnant moms to make a quick decision.

And finally, don’t forget to share this article because sharing is caring.